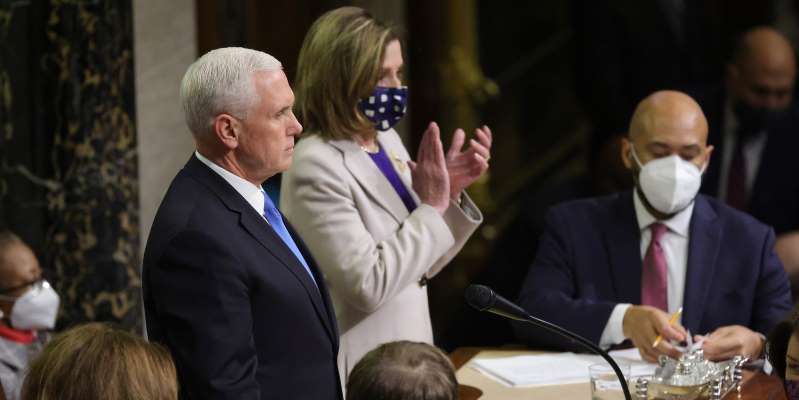 'Disgraceful': World leaders stunned by 'insurrection' at US Capitol

The House and Senate reconvened overnight after they were forced to pause the official count of the Electoral College votes and flee when Trump's followers stormed the building. The count of Biden's 306 votes to President Donald Trump's 232 was finished in proceedings that lasted until 3:40 a.m. Vice President Mike Pence read the totals to cap a somber end to an unforgettable day in Washington.

Minutes after, Trump acknowledged the results and said "there will be an orderly transition on January 20th."

In a statement released by the White House, the president again made false claims about the outcome of the election but said that this month will bring to an end "the greatest first term in presidential history."

Twitter had suspended Trump's account for 12 hours after he continued to push conspiracy theories about the election following the chaos at the Capitol.

Earlier, lawmakers were forced to pause the official count of the Electoral College votes and flee when Trump's followers stormed the building. A woman was shot inside the Capitol by a police officer and later died, the National Guard was activated and the mayor ordered a 12-hour curfew in the city that began at 6 p.m.

Three other adults died after what is believed to be some type of medical emergencies around the Capitol grounds, the Washington, D.C., police chief said.

The riots had interrupted debate in both chambers about a Republican objection to the Arizona results, which in the end was soundly defeated.

In reconvening the Senate after the order had been restored, Senate Majority Leader Mitch McConnell, R-Ky., said the nation's government had faced down greater threats than what he called an "unhinged crowd."

"I want to say to the American people: The United States Senate will not be intimidated," McConnell said.