Back to the Beach! Daytona, South Beach set for upcoming car shows 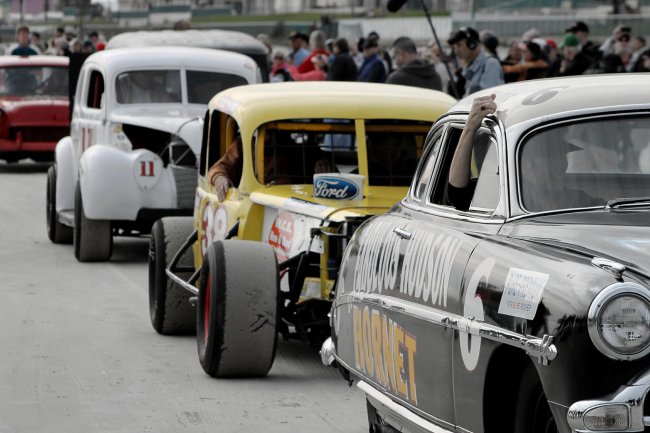 Considering its automotive history and its climate, perhaps it is fitting that “the largest combined Collector Car Show, Swap Meet and Car Corral in the USA” is the annual Daytona Turkey Run, scheduled this year for November 25-28 at the Daytona International Speedway.

According to its website, the event, founded in 1974 and held Thanksgiving weekend and again the last weekend in March, includes a 5,000-vehicle car show, more than 1,500 cars corralled and for sale, a swap meet and and arts and fashion bazaar.

The story of the event’s founding goes back to Stu Sarjeant and his 5-year-old son Jim, who had tried to enter their 1923 Ford T-Bucket in the 1973 AACA’s Gaslight Parade at Ormond Beach, but were rejected because hot rods were not allowed.

“Jim started crying and asked his Dad if they could have their ‘own parade’ next Thanksgiving,” the Turkey Run website reports. The first Turkey Run involved 45 cars and a motel parking lot in 1975. It grew to a high school lot, then to the Daytona Beach airport, and in 1989 moved into the speedway infield.

While the Turkey Run takes place at Daytona International Speedway, there’s another event in the area that traces its history to “the sand where it all began’.” The North Turn Legends Beach Parade has been held since 2012 in celebration of the days when stock cars raced along the beach at Ponce Inlet.

The parade, founded by Walt and Rhonda Glasnak and their Racing’s North Turn Restaurant and now also hosted by the Town of Ponce Inlet and Volusia County, is held eight days before the running of the NASCAR’s Daytona 500 and has drawn as many as 30,000 spectators.

Speaking of where it all began, early motorists discovered that the hard-packed sand at Ormond Beach, just north of Daytona Beach, provided a surface for speed. Things became official a year later when the Winton Bullet raced the Olds Pirate. In 1906, the Stanley Rocket Racer hit 127.659 mph, and the world took notice.

The JW Marriott Miami Turnberry resort and spa has been announced as the site of the new Motorcar Cavalcade, scheduled to debut January 28-30, 2022, and promising “South Beach meets the Kentucky Derby meets the Concours Show field.”

In other words, “Dress your best, wildest and most stylish,” the event website adds. “The cars will be bringing their best, so should you.

“This unique Concours d’Elegance will host and judge specially curated and themed displays of exclusive, iconic, legendary and simply awe-i

nspiring cars – ranging from the dawn of motoring to the most advanced hypercars in the world – all in an incredible Miami inspired garden party setting.”

The 18th annual Motor 4 Toys charity car show and toy drive is scheduled for December 5 at Los Angeles Pierce College in Woodland Hills. The show is staged by Dustin Troyan and the Motor4toys Charitable Foundation.

Brothers Andy and David Bagley founded Britain’s Salon Prive more than a decade ago, and it has become a 5-day collector car festival at Blenheim Palace that includes not only the concours d’elegance, but a hill climb and showcase of luxury hospitality.

The Salon is held in September, but in 2022 the Bagleys are adding a new event, Salon Prive London, to be held April 21-23, 2022, on the grounds of the historic Royal Hospital Chelsea, as a collector car season opener.