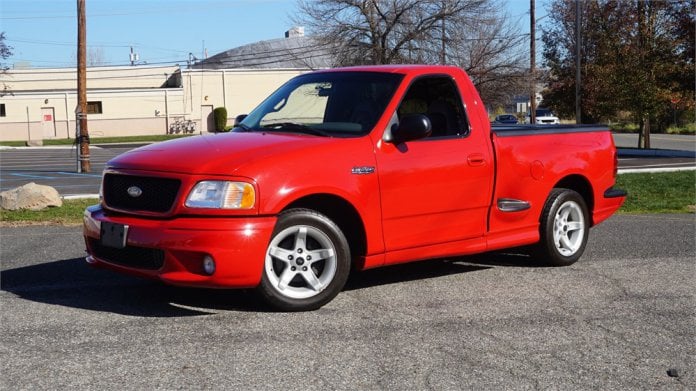 Featured on AutoHunter, the online auction platform driven by ClassicCars.com, is this 1999 Ford F-150 SVT Lightning.

This SVT Lightning Flareside truck was produced at the Ford Canada Ontario Truck Plant in June 1999 and finished in Bright Red. It features fog lights, body-color bumpers, and dual side-exit exhaust outlets on the passenger side.

“The cabin is furnished with a pair of Medium Graphite cloth and Ebony leather seats connected by a center section with a fold-down storage compartment and a cup holder,” the listing states. “The dashboard, door panels, and carpeting feature coordinating colors. Equipment includes power mirrors, locks, and windows; a power-adjustable driver’s seat; a tilt steering column; cruise control; air conditioning; dual pop-out cup holders; and an AM/FM/cassette radio connected to a six-disc CD changer mounted in one of the two storage compartments behind the seats.”

Under the hood is a supercharged 5.4-liter V8 engine that produced a factory-rated 360 horsepower and 440 lb-ft of torque when new. The engine was upgraded with a Volant Performance intake and an oil catch can. A column-shifted 4R100 four-speed automatic transmission and a limited-slip rear differential send power to the rear wheels.

This Ford F-150 SVT Lightning has a twin short- and long-arm suspension design, coil springs and shocks up front. It features staggered shocks, leaf springs, and a solid stabilizer bar at the rear.