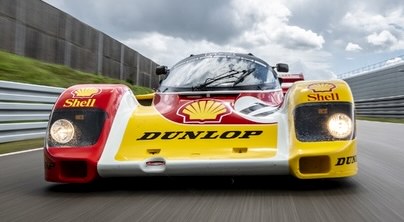 Which do you think Hans-Joachim Stuck found more delightful, being reunited with the restored Porsche 962 C he drove to the ADAC Würth Supercup championship in 1987, or the fact that, at age 70, he still fit into the racing suit he’d worn that season, a suit Porsche had preserved and readied for him to wear as he took the 962 C for a test drive?

Not only did Stuck drive the car in the German sports prototype racing series, but he used it as a test bed to help develop Porsche’s dual-clutch PDK transmission at racing speeds. After two years in competition, the car was used for aerodynamic testing at Porsche’s Weissach Development Center, and then joined the company’s car collection.